I love traveling on my own-with my husband available via text so that I can seek advice or share a meltdown when the mood strikes.

As a child, my family and I would take summer vacations through various parts of the U.S. At the time, my parents were both teachers so that meant summers were wide open.  We’d pack up the car (eventually upgrading to a van whose seat would transform into a bed with the push of a button) and hit the road for two incredibly long weeks.  While the trips themselves should have been fun, my dad’s grouchy demeanor invariably ruined any pleasure I might have derived from being away from home.  To this day, my mom insists I slept for the entire length of our vacations-though slightly exaggerated, she’s correct.  What is there to do cooped up with your bratty younger brother on the road for a ten-hour driving span?  I would read my books until I became car sick and then go to sleep.  They would wake me up to stand outside next to every new state sign we encountered.  I can’t find one picture where I’m smiling next to a Welcome to New Mexico, or any other state sign, for that matter…Torture, I tell you.

As an adult, I’m free to travel however I like;  I can sleep the entire flight if I so choose.

I fly standby, a courtesy extended to my from the wife of guy with whom my husband went to high school.  When I fly through her airline, I present myself as her guest (though I do purchase tickets) and must behave and dress appropriately.  This isn’t a stretch.  I’m very appreciative of her as this allows me travel opportunities I wouldn’t otherwise have due to money constraints.

Generally, my flights are quite early, with my arrival at the airport usually one and a half hours prior to boarding. My trip to Great Lakes had me at the airport at 5:20.  I haven’t had any issues with TSA being backlogged this early in the morning and I’m always sure to read the guidelines before packing to ensure I’m aware of any changes.  Aside from an occasional grumpy agent, I’ve never had any problems.  I do feel a bit exposed when going through the scanner (I don’t know if we have upgraded to the naked scanners yet *gasp*) and sometimes I’m pulled aside so they can ask me if I have any implanted devices…strange, because I don’t and I often wonder what in the world they could possibly see on my hip or knee that makes them believe I might have a screw or something in there.  I’m not the bionic woman and all my parts are the same I’ve had since birth, but I digress.  In summary, treat the TSA agents respectfully and pack your bags according to guidelines and you should be fine.

After passing through security and gathering my belongings, as well as putting my shoes back on, I recheck my boarding pass to make sure I’m heading in the right direction.  I proceed to the counter where I check in so that they know I’m flying standby.  I do believe this next part is very important:  be very polite, smile at the attendant, and thank them for helping you.  It will behoove you to make eye contact with them as well, letting them know that you are paying attention to names being called and that you do really want this flight!  You are at their mercy-if you are behaving rudely and talking loudly on your cell phone, don’t expect any favors.  You might just be sitting for the next couple of flights waiting for one to become available.

Flying to Chicago O’Hare was easy-I caught the first flight after checking my bag due to a full flight, and I was on my way.  I sat in between a man and a woman who seemed to know each other, as they chit chatted a couple of times before take off.  I asked them if they would like to sit next to each other but they declined saying that they chose the seating this way because they argue.  Interesting.  He slept most of the way while she watched a reality show about certain housewives.  That was great until she started crying and wiping her dripping nose on the inside of her t-shirt.  I can understand the seating arrangements now.

While the flight to Chicago was mostly uneventful, trying to maneuver myself out of the airport was another story.  O’Hare is massive, if you’ve never been. There were signs directing me to areas in which I’m unfamiliar so just about none of it made sense except for Baggage Claim. I picked up my carry-on without any problems, thankfully.  My next mission was to find where I was supposed to go in order to get an Uber to my hotel.  Not so easy for me and this is when my freak out occurred via text with my husband. It didn’t help that I didn’t know what level I was on-I swear there were no signs that I saw to indicate that to me.  I started getting overwhelmed and decided it was best if I found an outlet somewhere that I could charge my phone and gather my wits.  I think I sat on the floor by the elevator for about thirty minutes before I calmed myself down enough (and got enough iPhone juice) to brave the crowds to find where I needed to be.

I went downstairs and saw a sign that said you can catch your Uber on the upper level.  I then went back upstairs and saw the same sign. Where the hell is the upper level?? I asked one of the gentlemen working for an airline who was standing around, seemingly waiting for me to ask him a question. I asked him nicely where the upper level is so that I can grab an Uber.  He looked irritated by the mere question and responded, “I don’t even know where you’re trying to go!”  I’m not sure what difference that would have made so I told him the signs all say to go to the upper level (there were several upper levels) but I was confused about where to go.  Frustration!  He told me that no, I in fact, needed the lower level to get what I was looking for and after I decided he was a jerk, I also decided that he didn’t know what he was talking about.  I stood looking at the map of this huge airport while on the verge of tears because I was never going to find an Uber, I was never going to get to the hotel, and I was going to turn into Tom Hanks and live in the airport forever!  As I was about to give up all hope and cry, I saw a TSA agent walking towards the door and I asked her where to go in order to get the heck out of here and she said, “Right outside this door.”  Thank God.  I walked a little ways and saw signs directing people where to wait for an Uber or Lyft and let out a big sigh.  Finally.  And you can bet I was cursing that other jerky guy under my breath as I made my way over to the pick-up area.

I used the Uber app to request a driver-this was my first time using it on my own so I didn’t really know what I was doing.  Before I left home, I was sure to put my credit card info on file so that I didn’t have to mess with it later.  You never know what kind of cell service you’ll have at any given moment while traveling so don’t count on being able to download anything.  Do it when you have wi-fi.

I waited for my ride-he was quick, and I was thankful.  We had about a forty-five minute drive so we had a nice conversation where he told me about his grandkids and various other tidbits about his life.  I enjoy times like these;  I can relax a little and learn some interesting facts about others.  It reminds me that people can be delightful.

He dropped me off at my hotel, safe and sound, and I was beyond relieved.  It had been a long day, I didn’t know what to expect in Chicago other than what I’d heard in the news, and I just wanted to lounge on my bed and watch some crappy tv for a bit.

I decided that before I got too comfortable, however,  I should find somewhere to get dinner.  I went to the front desk and asked the attendant if she knew of a liquor store nearby. Let’s be real, I cared about having a drink more than food and besides, liquor stores have chips and I’d be happy with that.  She directed me to the Subway next door which also had a gas station convenience store next to that.  Woohoo!  Back to my room I went carrying a foot-long steak and cheese sub and a bag with two Lime-A-Rita’s.

That’s what I call the perfect ending to a day of traveling.

Let’s recap the fine art of flying solo on standby: 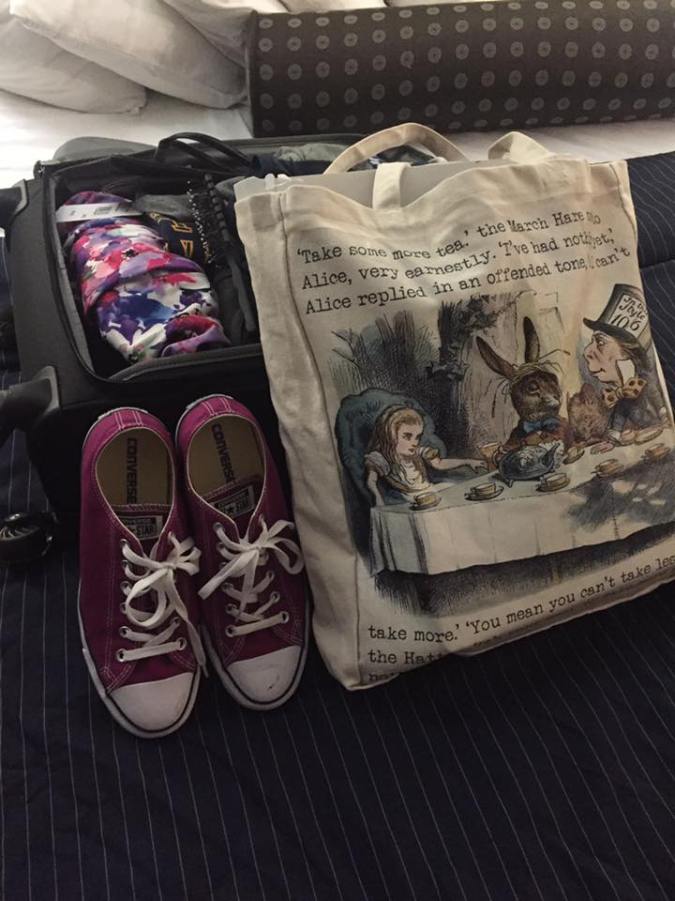 I made this bag for a friend’s birthday-hers was the 19th, mine is today 😁 She told me she loved it! #cricut #cricutmade #cricutmaker #crafter #aussiepuppy #creativedesigns #handcrafted #45yearsold #notold #craftymama #vinyl #htvvinyl #htv #craftingfun
I had a fun craft day making this canvas zipper bag-who doesn’t love Stephen King? #stephenking #craft #cricut #heatpressvinyl #htvvinyl #crafter #books #nerdfashion #nerd #theshining #horror #novel #crafty
Having a project to work on is relaxing and rewarding. I worked in this today until I ran out of light and will pick it up again in the morning. I love the pattern and color! I’m not sure what I’ll do with it, however... #peacock #vinyl #cricut #cricutmaker #shinyblue #crafting #craftygirl #winetime #relaxation #serene #art #pretty #artsandcrafts
I’m enjoying my Cricut maker and decided to gussy up my laptop with a zombie cat, what do you think? 😁 It’s fitting somehow 🤓 #cricut #cricutvinyl #laptopdecal #zombiecat #hobbies #crafting #hyperfocus #ridethewave #crazycatlady #cats #scaredycat #cricutmaker
The grounds go in the FILTER, not the cup. Adult ADHD is real. Lose my keys, purse, phone hyper focus on exciting new craft ideas...house in complete chaos. Yep. #adhd #adultadhd #exhausting #adhdwomen #payattention #coffeeaddict #whereismymind #creative #messy #thisisme #coffee #crafts
Baxter plans to help with the cleaning later... #dogsofinstagram #mybuddy #doggo #husky #malamute #goodboi #doglover #housekeeper #lovelylady #sweetpuppy