I’ve developed a certain fondness for adventure over the last couple of years.

Fondness?  Maybe insatiable appetite would be more fitting.  I crave it.

My husband bought a motorcycle a year ago figuring that he would enjoy the opportunity to ride on those rare occasions he’s allowed home (he’s an OTR truck driver). It was basically built for one.  He didn’t realize, however, that once he took me for a ride, that one seater would be getting replaced with a couch built for two, and he would need to add a back rest.

A little less that a year later, we found ourselves with a bigger bike equipped with plenty of room for me to carry my essentials (my crap), a nice little stereo, and plenty of room on the back for me to feel safe and comfortable.  So comfortable, in fact, that I’ve nodded off a few times!

At the beginning of May we were able to take our first real trip on our new bike and it was a great introduction for me.  We ran into heat, rain, gusty winds, and a break down that he was able to figure out and fix, thankfully.  I absolutely loved it.

The first leg of our trip had us heading to Yuma, Arizona.  If any of you are familiar with Yuma, you can understand when I describe it as The Devil’s Butt Crack.  It’s not uncommon to reach 115 degrees in the summer, if not higher.  Heat and I do not mix well.  Thankfully, there’s a place in Thermal, California that sells date shakes which, if you haven’t had one yet, I urge you to do soon;  they’re glorious creations that will cool your tongue in the middle of the blazing heat.

See how happy I am?

I remember wishing that the shop had been cooler inside but I was grateful to have a little break from the blazing sun on my shoulders.

Onward we rode with me on the back snapping photos of our surroundings with the Cannon we picked up especially for our trip and with my iphone 6.  I’m very new to that camera so I have a lot of learning to do-I was disappointed in my ability to take action shots while riding.  Most came out blurry but I was able to manage a few usable ones.  Of course, I managed to take some selfies, too. 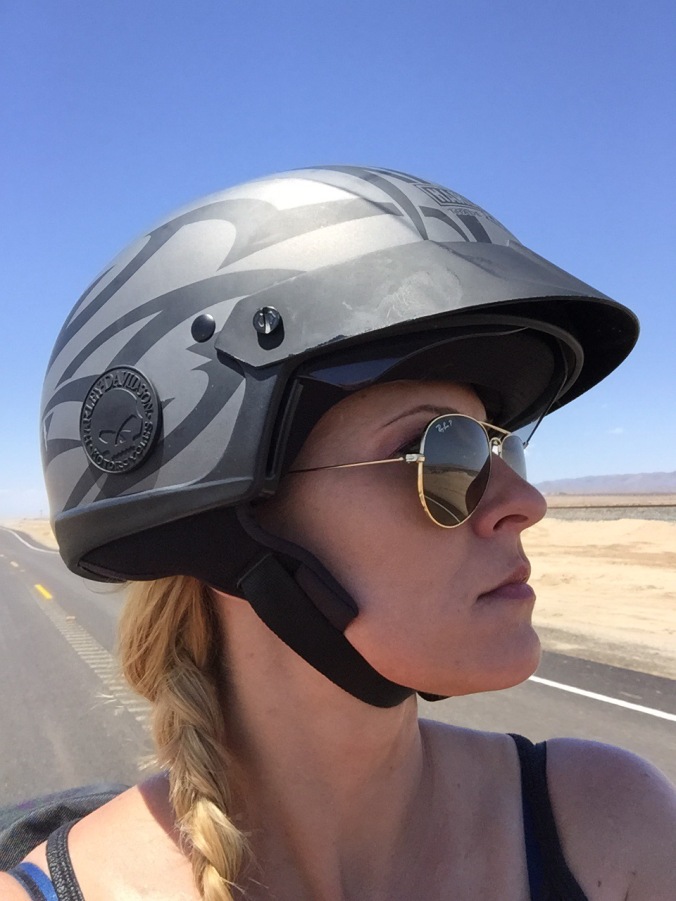 I find ways to entertain myself on long stretches through the desert…!

We made it to our first destination-visiting family and lounging about for a day and night and then it was time to say goodbye and hit the road again.  This is where we ran into a bit of trouble.  The bike had been running smoothly up to this point so we thought nothing of stopping at the one store in the middle of nowhere to grab something to drink.  Apparently that was some bad decision-making because the bike wouldn’t start back up again-completely dead.  Jumped on the phone to HOG (they help with towing, etc.) to see if they could get us to a nearby mechanic which turned out to be 70 + miles away and would cost us $800. Yikes! Thankfully, Family Dollar carries some basic tools and my husband was able to figure out the problem and get it fixed. Amazing!  I was so relieved because it’s no fun being stranded in places to which you are unaccustomed. Like I said, I do manage to find ways to keep myself occupied so I made my own little biker buddy while my husband was on the phone. 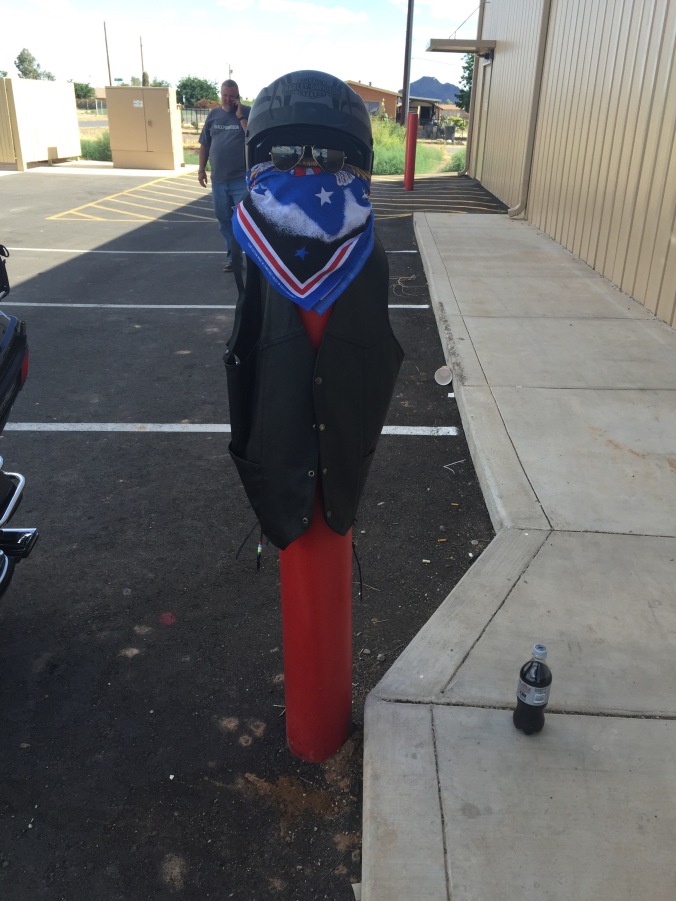 I try to go with the flow as much as possible, even if I don’t always succeed.

We made it down the road a few miles before the issues returned but Robert was able tighten a few more screws and there were no more problems for the remainder of the trip.

That evening we arrived in Prescott, Arizona. Neither of us had ever been there and I do wish we had gotten there earlier in the day as originally planned, but I was thrilled at how cute the town was as we made our way to the hotel.  Pulling up into the driveway , we came across a group of German tourists that had rented motorcycles  to make their way from Florida to Las Vegas and back.  They were loaded down with packs of beer and settling in for some relaxation.  They extended an invite but we declined as we already had plans to hit Whiskey Row.

After washing the dirt and grime off from our adventure earlier, we plotted out our path to Whiskey Row.  We had been told by different people that the walk was only about a short block so when we looked on our map and discovered it was actually a mile and a half…we decided it was worth it anyway and so off we went on our little excursion.

Our initial plan was to get a drink from each of the bars but when we discovered what an excellent bartender we would have in the first one,  we decided to stay and enjoy ourselves there for a few hours.  I’m too competitive for my own good so I stayed neck and neck with Robert on the drinks and needless to say, that night is a little fuzzy.  I believe we ended with him having 8 and me having 7.  The drinks were excellent as was the service.

Here’s a little sample of our adult beverages:

This was the BEST Bloody Mary I’ve ever had.  No comparison!

This was my last drink and packed a wallop.  It was appropriately named Finger in the ass. 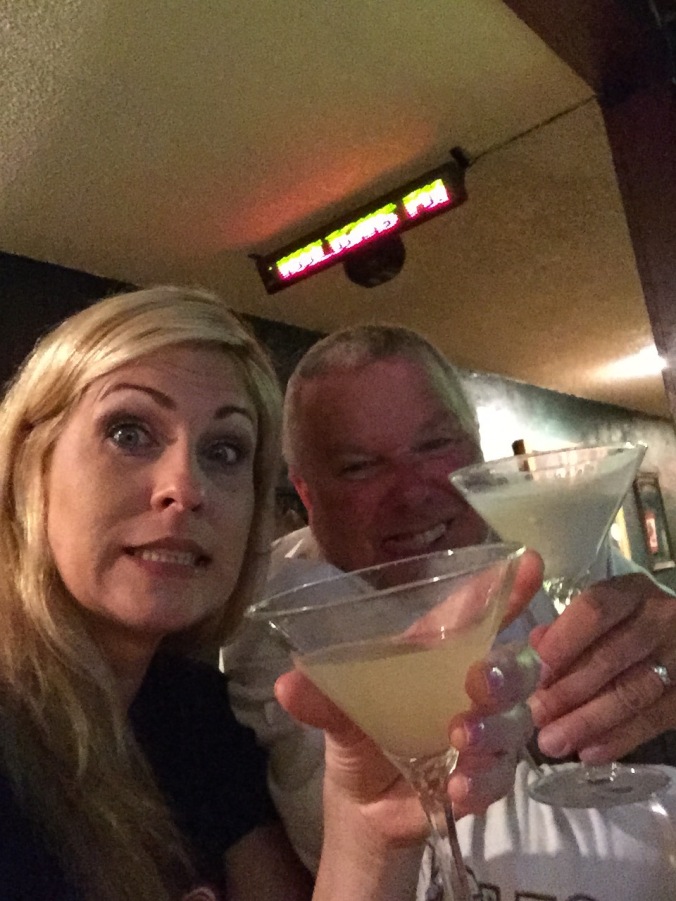 We managed our mile and a half back to the hotel just fine (and upright) and slept in a little later the next morning.  We had so much fun and hope to return later this year and see our favorite bartender.

(By the way, I was corrected on my pronunciation of Prescott-apparently, the last syllable rhymes with biscuit.  Like Pres-cuit.  I’ll just continue saying it how I normally do:  PresSCOTT.)

3 thoughts on “Adventures in Motorcycling, Part One”

I had a fun craft day making this canvas zipper bag-who doesn’t love Stephen King? #stephenking #craft #cricut #heatpressvinyl #htvvinyl #crafter #books #nerdfashion #nerd #theshining #horror #novel #crafty
Having a project to work on is relaxing and rewarding. I worked in this today until I ran out of light and will pick it up again in the morning. I love the pattern and color! I’m not sure what I’ll do with it, however... #peacock #vinyl #cricut #cricutmaker #shinyblue #crafting #craftygirl #winetime #relaxation #serene #art #pretty #artsandcrafts
I’m enjoying my Cricut maker and decided to gussy up my laptop with a zombie cat, what do you think? 😁 It’s fitting somehow 🤓 #cricut #cricutvinyl #laptopdecal #zombiecat #hobbies #crafting #hyperfocus #ridethewave #crazycatlady #cats #scaredycat #cricutmaker
The grounds go in the FILTER, not the cup. Adult ADHD is real. Lose my keys, purse, phone hyper focus on exciting new craft ideas...house in complete chaos. Yep. #adhd #adultadhd #exhausting #adhdwomen #payattention #coffeeaddict #whereismymind #creative #messy #thisisme #coffee #crafts
Baxter plans to help with the cleaning later... #dogsofinstagram #mybuddy #doggo #husky #malamute #goodboi #doglover #housekeeper #lovelylady #sweetpuppy
Ever on the hunt for my roots, I was able to obtain the obituary for my great grandfather in Oklahoma. Up until about a year ago, I had no idea who he was since my grandad was given up for adoption in 1915. With the advent of dna, so many mysteries have been able to be solved. It’s an exciting time! Now if I could only see some pictures of him and his wife, Alberta, I would be absolutely thrilled. ❤️ #obituary #genealogy #dna #familyhistory #research #familytree #oklahoma #vinita #muskogee #tomtinsley #albertasouthard #southard #hugefamily #ancestors #ancestry #desendants #indianterritory #findyourroots
%d bloggers like this: